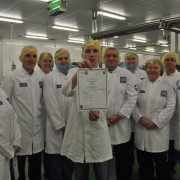 Reaseheath College’s Food Centre in Cheshire has gained a globally recognised Grade A certification for food safety from the British Retail Consortium (BRC) for the third successive year. The college remains the first and only educational institution in Britain to achieve the accreditation for BRC issue 7, the latest benchmark for best practice in food manufacture.

The quality mark was approved after an exacting repeat audit showed that Reaseheath’s food manufacturing systems continue to operate under highly controlled conditions and to the highest industry standards. Areas inspected included food safety procedures, cleanliness of the facility, knowledge of staff and students and the traceability of food ingredients.

The successful bid was led by Reaseheath’s newly appointed Quality Assurance Manager Shaun Whitlock, who said: “Any changes to the BRC standards are a difficult time for industry, however the college has taken this head on and achieved the results we wanted. Changes to the standard include stricter supplier management, labelling control and prevention of food fraud.

“The team has worked extremely hard to ensure we can deliver the best possible service to our students and local businesses and should be congratulated on their success. Thanks to their hard work, we can ensure the ever changing standards followed within industry are replicated in a controlled learning environment.”

As well as Shaun’s appointment, the Food Centre’s team has been reinvigorated with the promotion of Nick Blakemore to Food Centre Manager from Curriculum Manager, and the recruitment of Emily Fisher as the new Commercial Development Manager. Emily, who has previously been employed by several blue chip companies, is working closely with national and international businesses on food trials and training. Julie Bent has been promoted to Commercial Development Co-Ordinator.

There have also been some major renovations to the bakery to allow the introduction of a Bakery and Patisserie foundation degree.

Reaseheath’s £7 million Food Centre was opened in 2011 and remains one of the best equipped food processing teaching and practical facilities in Europe.

Built to exacting standards and staffed by a team of specialist food technologists recruited directly from the food industry, the centre has dairy processing halls and production areas for bakery, cake design and confectionery. Many local, national and international food and drink manufacturers use the facilities for new product development, technical advice or staff training. These partnerships lead to work experience and job opportunities for the college’s food technology students. The college also offers training sessions to members of the public which include cake decoration, HACCP and food safety. 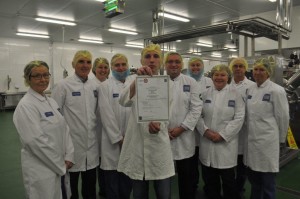 Explore our full range of courses…